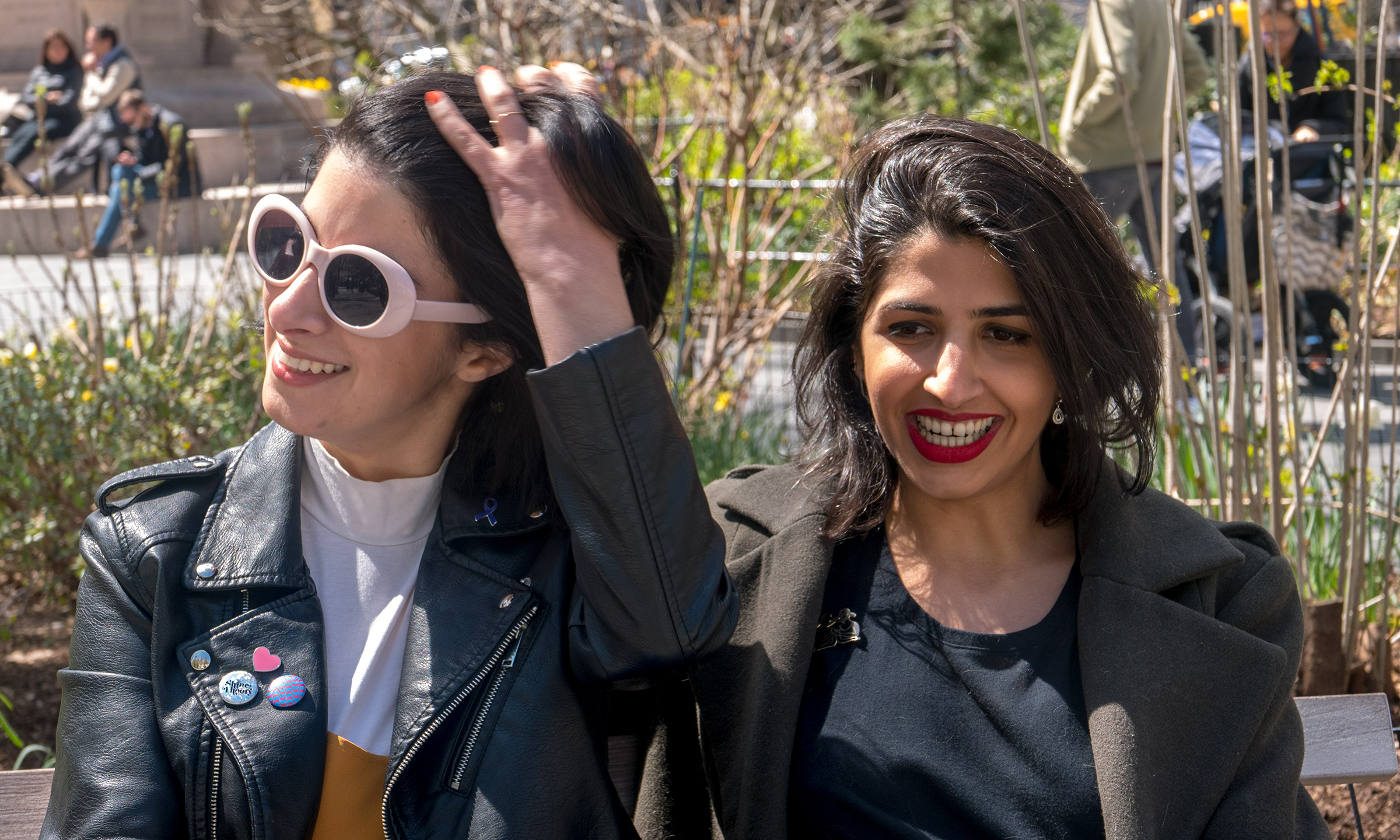 Mahya Soltani and Kiana Pirouz on unlearning and reclaiming narratives

Mahya Soltani and Kiana Pirouz are friends and co-creators of Before We Were Banned, an ongoing art series that reorients the narratives of the countries and their people included in Trump's controversial Muslim Ban. The duo found friendship in one another in the aftermath of the Ban, seeking both solace and a yearning for community.

Hi Kiana and Mahya! Tell us a bit about yourselves.

Mahya: I was born in Tehran and was raised between Tehran and Dubai, and after living in Brooklyn for two years I feel at home the most here. I don’t 100% belong anywhere so I can easily fit everywhere. The easiest way to explain what I do is to say I’m a graphic designer, but the most correct explanation is that I make things.

Kiana: I’m a Capricorn Sun, Aries Moon & Scorpio rising. On paper that’s pretty intense but in reality I am just an empath trying to make it in this world. I was born in Tehran, Iran, and raised in Atlanta, Georgia. I’ve had many lives in my 12 years in NYC – from working at SPIN Magazine (RIP) to Google to ad agencies. But these days I’m going freelance. I want to take my marketing skills to help female entrepreneurs or immigrant businesses thrive. 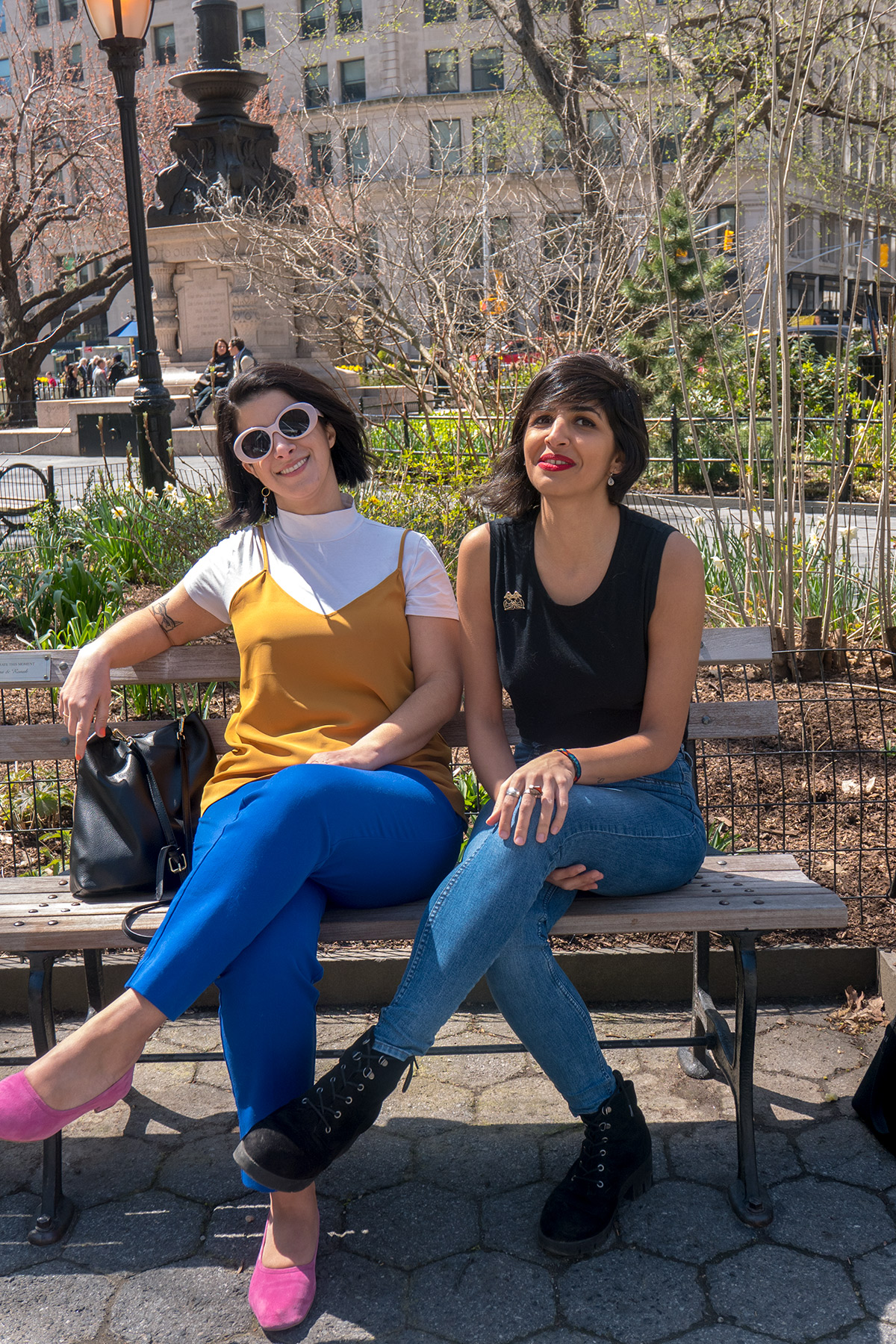 What's the story behind how you both met?

Mahya: After the Muslim ban, I got a message on instagram from Kiana, saying something like, “Hey, you’re Iranian, I’m Iranian. You’re in Brooklyn - I’m in Brooklyn. We should meet!” and of course I said, “Sure!” and we had our first brunch and 2-3 brunches later we were planning our first Norooz (Persian New Year) party, and 8-10 brunches later we were planning our first art show together. And now we are working on several projects together, and every day I’m so grateful for Kiana’s courage to send that bashful ‘friendship request’ that day.

Kiana: Yeah, the Ban made me realize I was missing a community of diaspora. This idea of community seemed like the only way to heal, and Mahya was the first person I (yes, bashfully) reached out to. I’m really glad it worked out so amazingly, it feels super magical and fateful.

You are both co-curators of Before We Were Banned, a series that aims to subvert the Muslim Ban 1.0 by cultivating a platform for creatives of the seven countries on the list to draw their own picture and write their own narrative. How did your friendship evolve into a partnership in executing such a vision?

Kiana: Our friendship is a lot like those Richard Linklater movies – Waking Life or Before Sunrise – in that we go to brunch/drinks/hang out and talk stream of consciousness. We end up dissecting subjects and call things for what they are. We continued to lament that the Muslim Ban is effective only because of these perpetuated xenophobic narratives about immigrants and refugees, and eventually we decided to take back the narrative. The concept evolved organically to showcase work by artists with lineage to the countries. We put out an open call on Instagram, found a gallery space in Bushwick and held the show on the anniversary of the first Executive Order. The date was intentional, we wanted the show to be a haven for people affected by the hateful ban…to celebrate our cultures on a weekend that otherwise felt so dark. Community healing became a huge part of the show and it’s what keeps us going.

Mahya: I think what makes our work/friendship dynamic so natural and organic is that we trust each other and each other’s skills. What we learnt after doing our first art show [without having any experience in doing a similar project before], is that there is no other way than trusting yourself and trusting your partners and working hard and making it happen.

Iran is often portrayed in media as a site of dystopia. What are some misconceptions about this portrayal, and what is Iran through your lens?

Kiana: The perception of Iran in America is truly one note. I really liked the reaction of people who came to Before We Were Banned, because the art was not all political. There were family portraits and general life moments. People were disarmed by this because it’s completely shocking to see normal ordinary life from these regions, when all that’s shown on American media is war and despair. It’s de-humanizing. Iran is OLD!! Ancient! The last 40 years of politics has nothing on centuries of Persian contributions to society. My personal idea of Iran is never political, but rather tender memories of trips to visit my grandparents, and of course the food. Give me a dish more delicious than zereshk polo tahdig!

Mahya: Iran is a strange place, good strange. And there is no way of knowing what I mean other than going there and seeing it for yourself. Iran today is full of contradictions and dualities. Most people have been leading dual lives for years; but also they know how to have fun, and how to manage both, which is really interesting to see and experience. It’s a big melting pot of hospitality, great food, national pride, superstitions, religion and rebellion.

How do you delineate between friendship and work?

Kiana: I think that’s the beautiful thing. We don’t really delineate. Working with Mahya has helped me unlearn the weird performance of office stress. Mahya and I collaborate, and it doesn’t even feel like work. My whole relationship with the concept of “work” has shifted since collaborating with her.

Mahya: I mean bottomline is we both know what we have to do, and somehow we manage to get it done at a bar sipping our malbec, or over a heart warming plate of Ghorme Sabzi, or a joint or two. 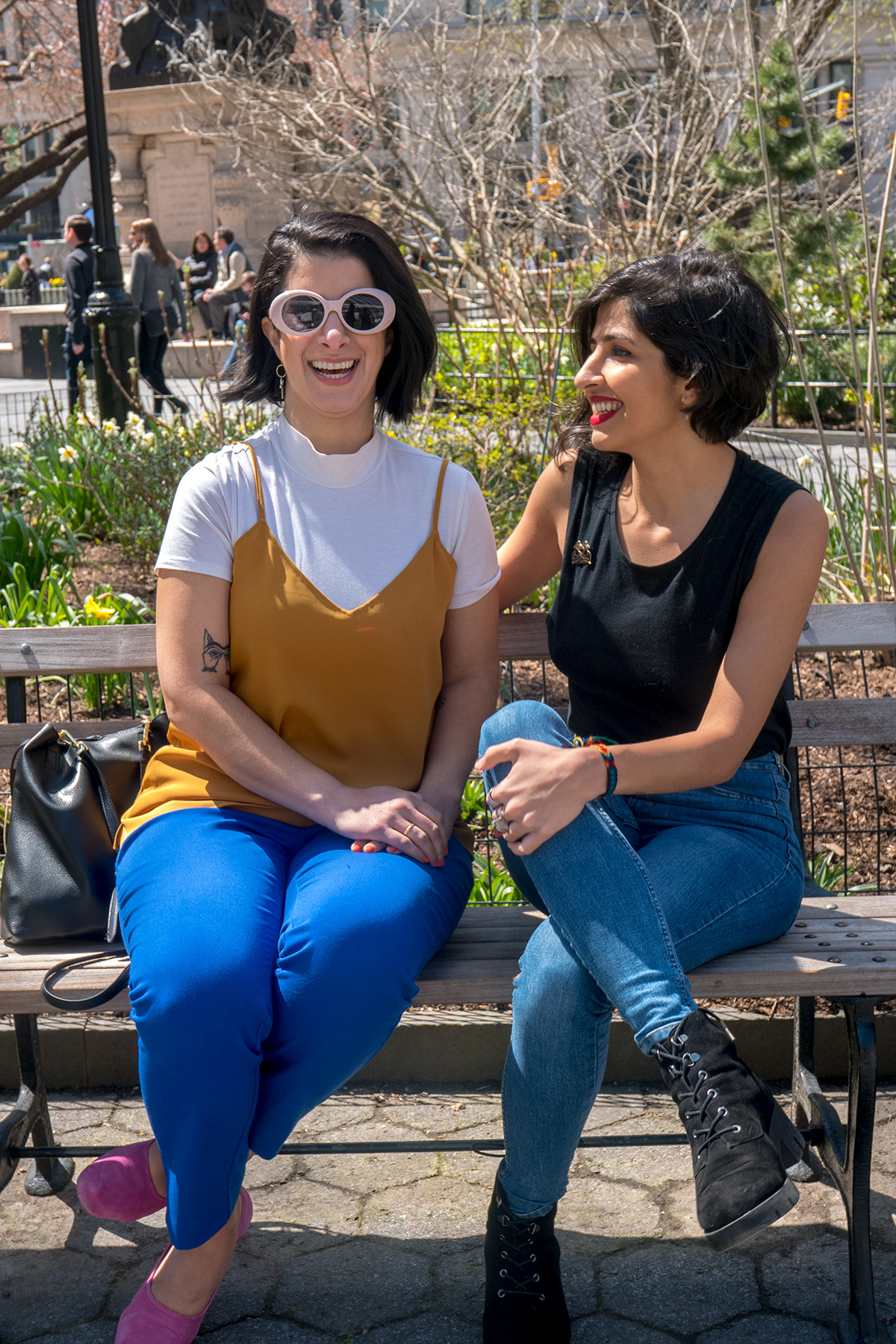 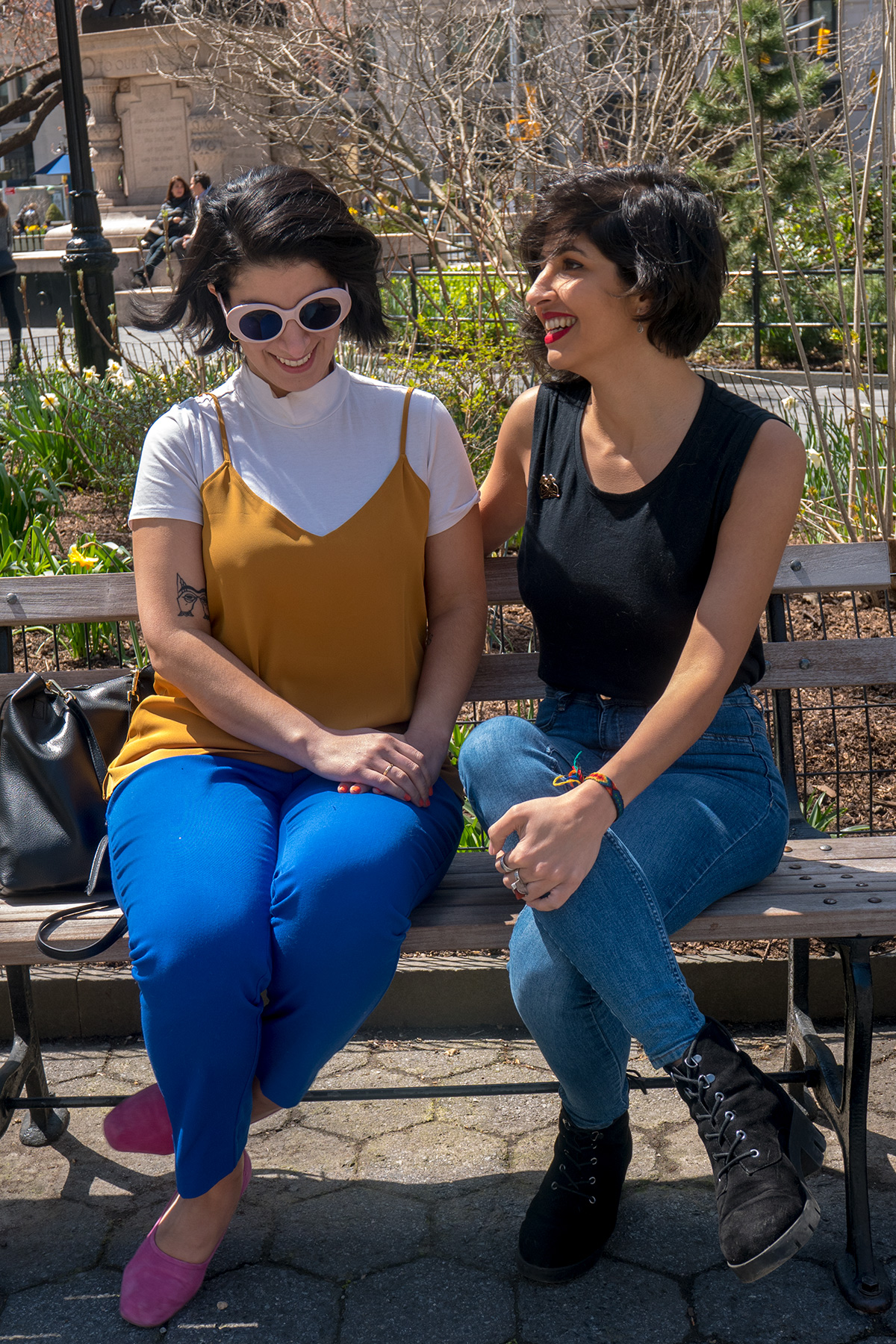 —
In this part of the interview, Mahya and Kiana ask one another questions as collaborators, co-creators and friends.
—

Kiana: It’s quite a stressful time these days with information overload & the state of the world. How do you keep your cool and recharge?

Mahya: I try to avoid things that change my pace, my biggest problem with technology, news and accessibility these days is how they affect our pace. We’re meant to fly around in all directions and explore like a butterfly, but being online all the time is like a butterfly that gets stuck in/on a car and has to move in an unnatural speed, and when it gets to the ‘destination’ it feels lost and dizzy.

Mahya: As we try to find and redefine our role and values, ’Unlearning’ is very important. What is the one thing you want to ‘unlearn’?

Kiana: Not so seem basic or “duh” but I am constantly unlearning as much of internalized patriarchy as possible. Especially as it relates to sex & shame. You know, with the whole public outcry against sexual assault It reminded me that violence is the number one value of patriarchy. In biological reality, human sexual pleasure of course diffuses violence. But they re-branded sex as violence, sex as power. I am constantly having to remind myself that sex is pleasure, joy, play and love. Sex (with self or others) can be healing and spiritual. But you’d never know that with the level of indoctrination from centuries of patriarchal narratives and policies. I hate that sex work is illegal and that the lack of laws to protect the workers truly impacts the most marginalized groups like women of color and trans people. In doing my best to fight SESTA and FOSTA, I have found myself confronting my own beliefs on sex and personal worth. The fact that female sexual pleasure is such a stark threat to patriarchy makes me giggle, but it also reminds me that it’s our goddess given right to be sexual however we want. Otherwise, are we even full human beings? 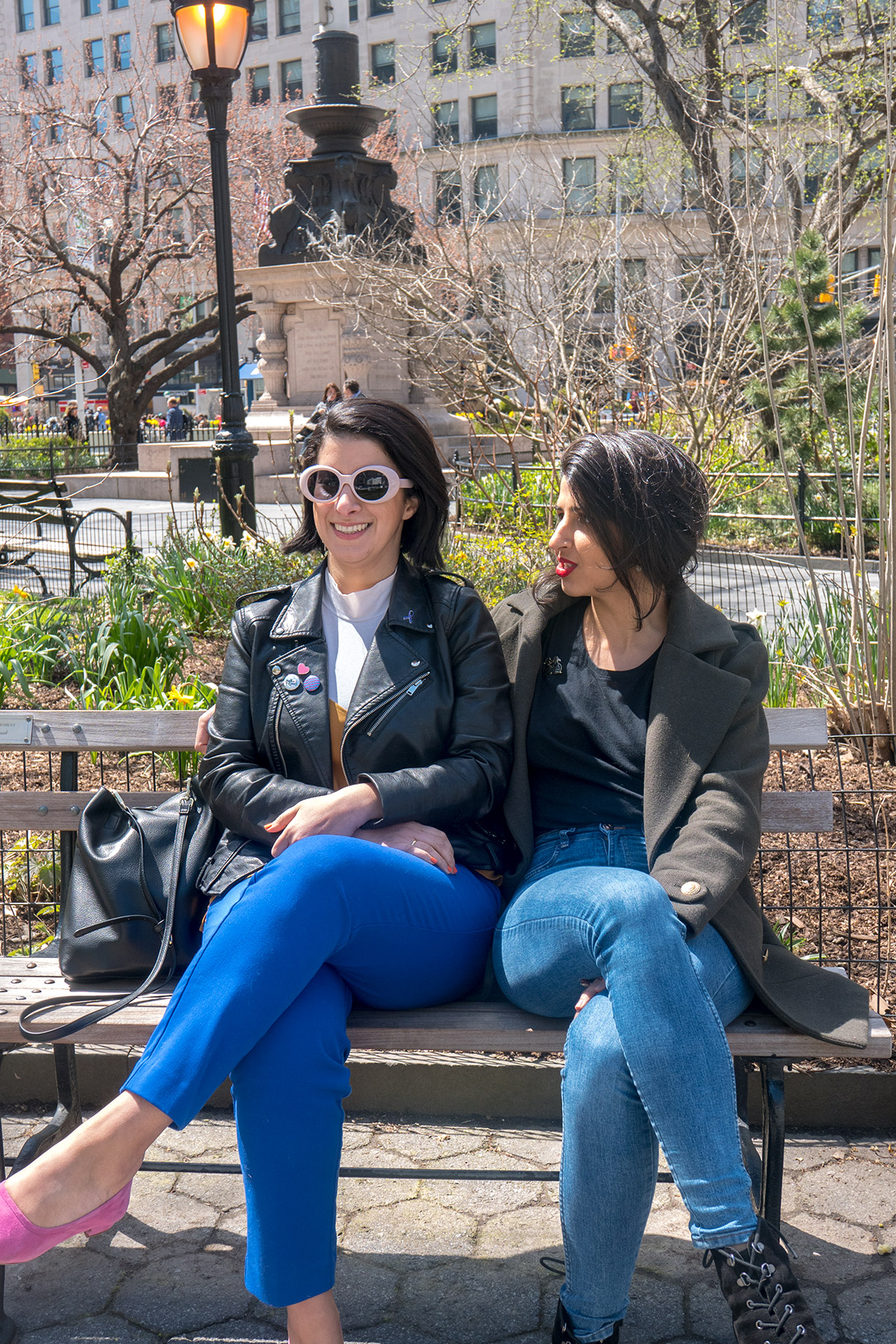 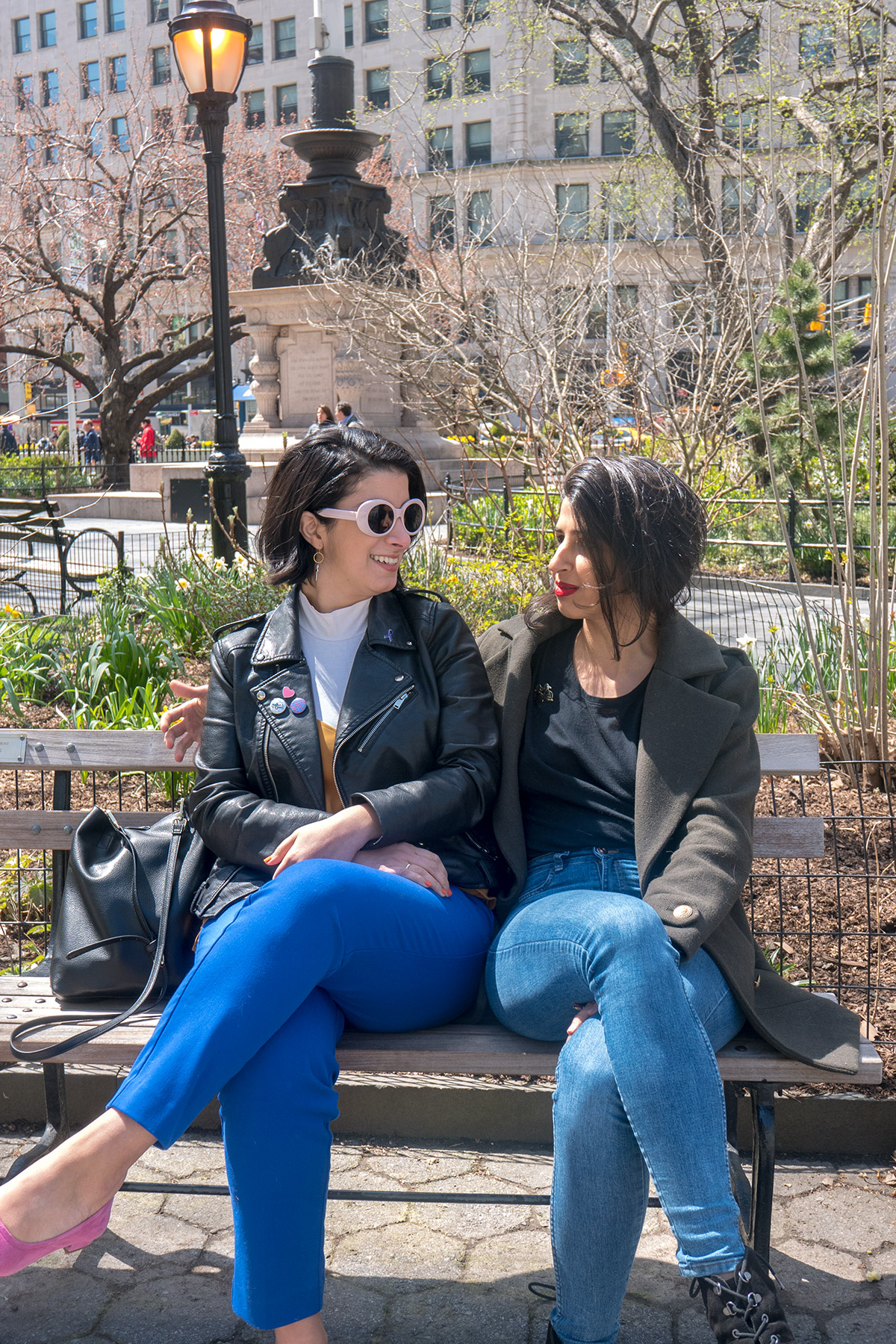 Mahya: I have learnt (and am still learning) to refuse to get on board with predetermined universal systems or concepts that force us to be what we are not. To name a few of these pseudo-values: productivity, career and marriage. I feel like all these overrated concepts give false value to certain things that may not universally apply; but we all give in to them because we think we have no other option. I think laziness gets a bad rap when we all actually very much enjoy it, and productivity gets so much credit when we don’t always know to what end or to whose benefit we overwork ourselves. Not having a clear career path is considered a weakness; we have to find that one job that we want to do forever (career), or we have to find that one person that we will love forever (marriage). I think these add unnecessary anxiety and stress to our daily life, and I’m working on unlearning them. 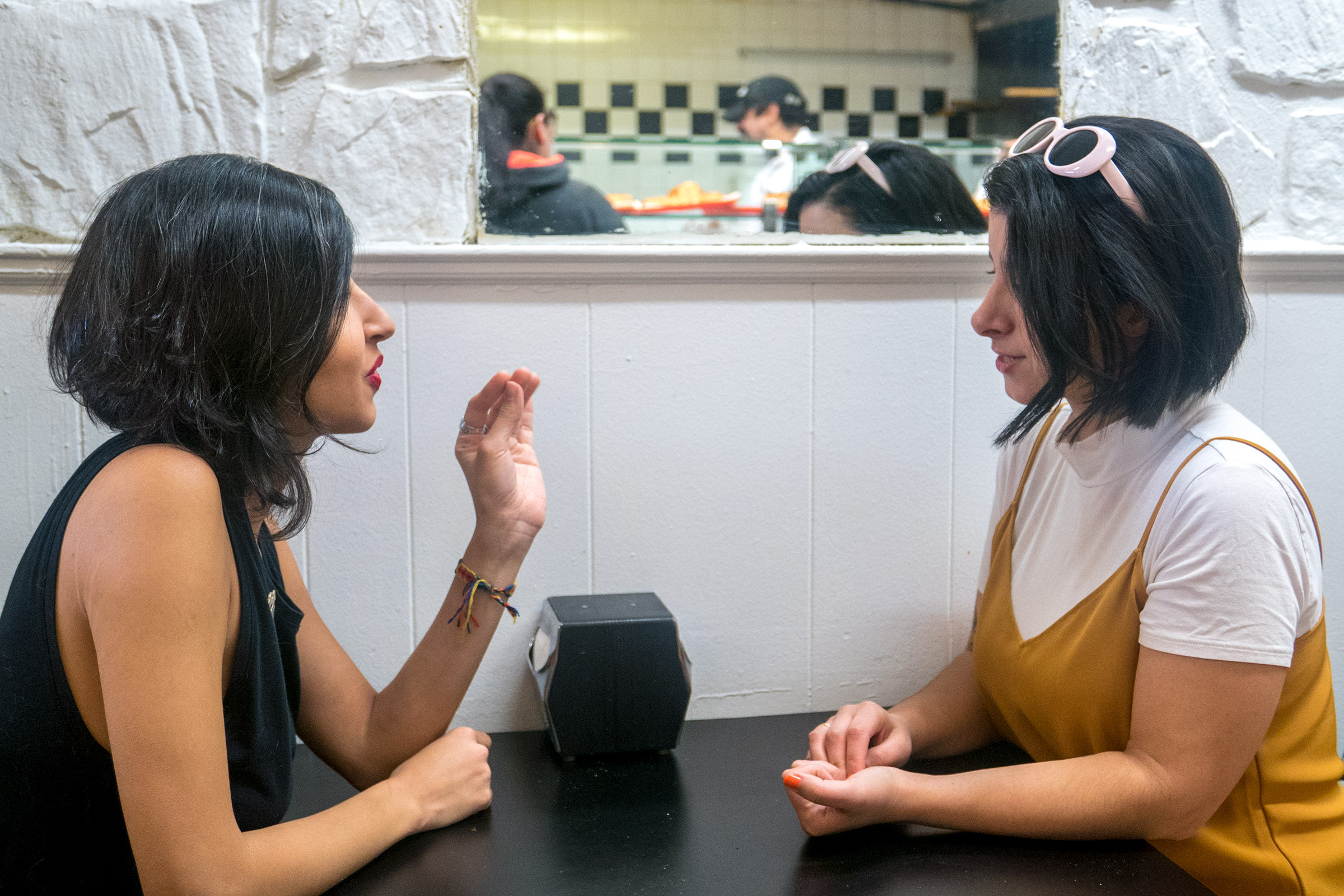 Mahya: Right now, Muslim-majority refugees/immigrants and are the persecuted people du jour. History shows it hasn’t always been us, but who do you think is next?

Kiana: AI. Bots. Machine learning. Think about it. The reasons why any group is persecuted is because of over-generalizations or even false narratives spread about them. We’ve grown up with fantasy books and movies scaring us for the last 30 years. There’s all this fear about immigrants “taking” jobs. The same fear is in the rhetoric about bots. I’m not anti or pro-bot, but I can see the same patterns taking place in the mainstream, the same narratives. 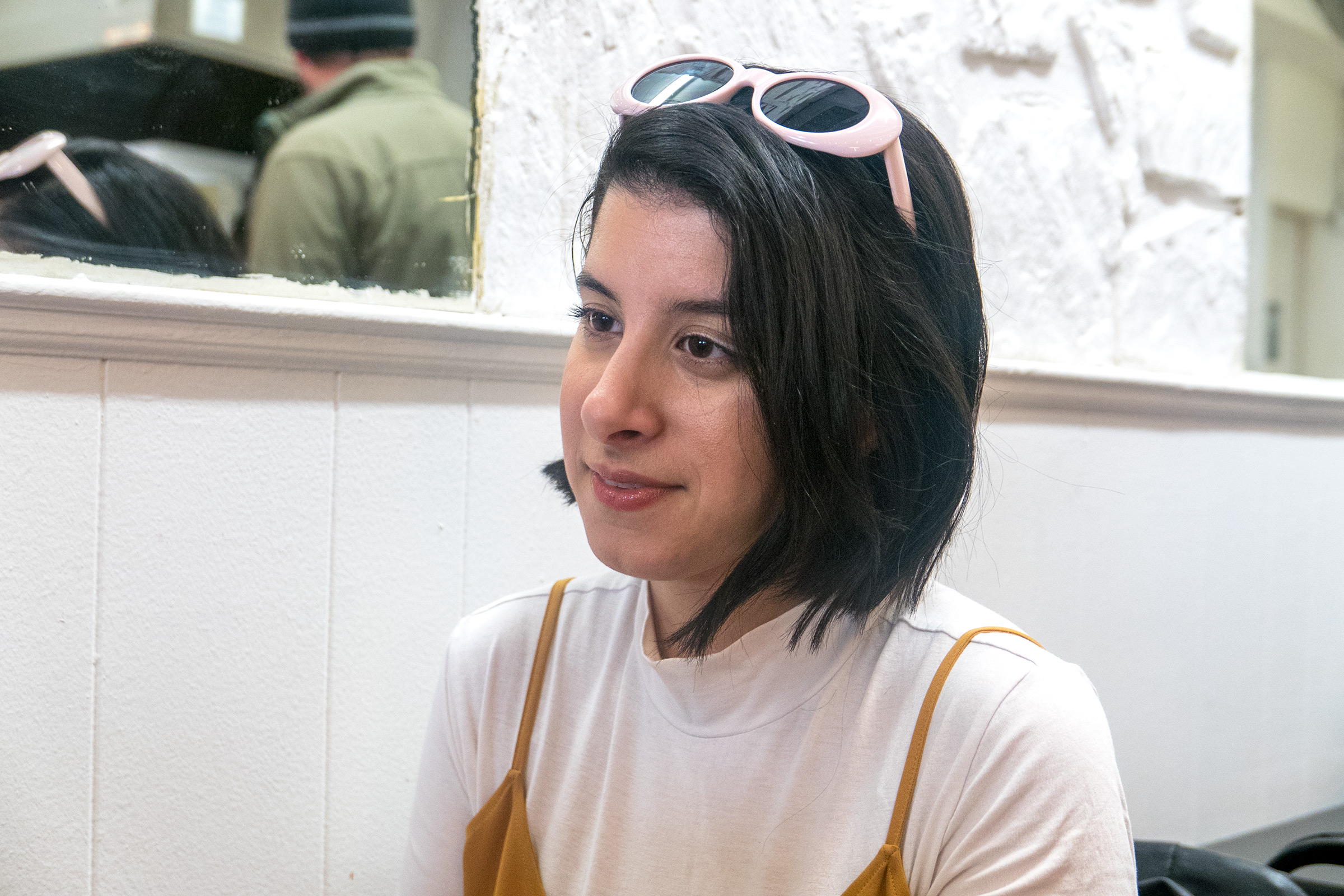 Kiana: What book are you most inspired by right now? One that you think about every day and why?

Mahya: Etel Adnan, the Lebanese painter, poet, author. I got hooked on her by you actually. and now I’m reading my fourth Etel Adnan. Her essays in "Of Cities and Women" are something I keep going back to, and that’s a book I gift a lot. Her "Journey to Mount Tamalpais" is a beautiful love letter to universe and specifically to this one mountain. Now I’m reading her "Sitt Marie Rose" which is a novel unraveling events during the Lebanese civil war in the 1990s.

Mahya: What about you, what book or author are you thinking a lot about these days?

Kiana: Our friend Jeanne lent me this book called "The Great Cosmic Mother" by Monica Sjöö & Barbara Mor. It’s non-fiction, a mix between human “history” and tracking the erasure of herstory. The fact that ancient civilizations, the written word, societies were developed by women, and how the first “religion” was worship of the Goddess, being women, mother, Earth and the universe – life force energy & feminine energy. It’s a really great reminder that no matter how much patriarchy wants us to think we are less than, we know in our core that even though our power is threatened, we still have it. We’re fucking goddesses! 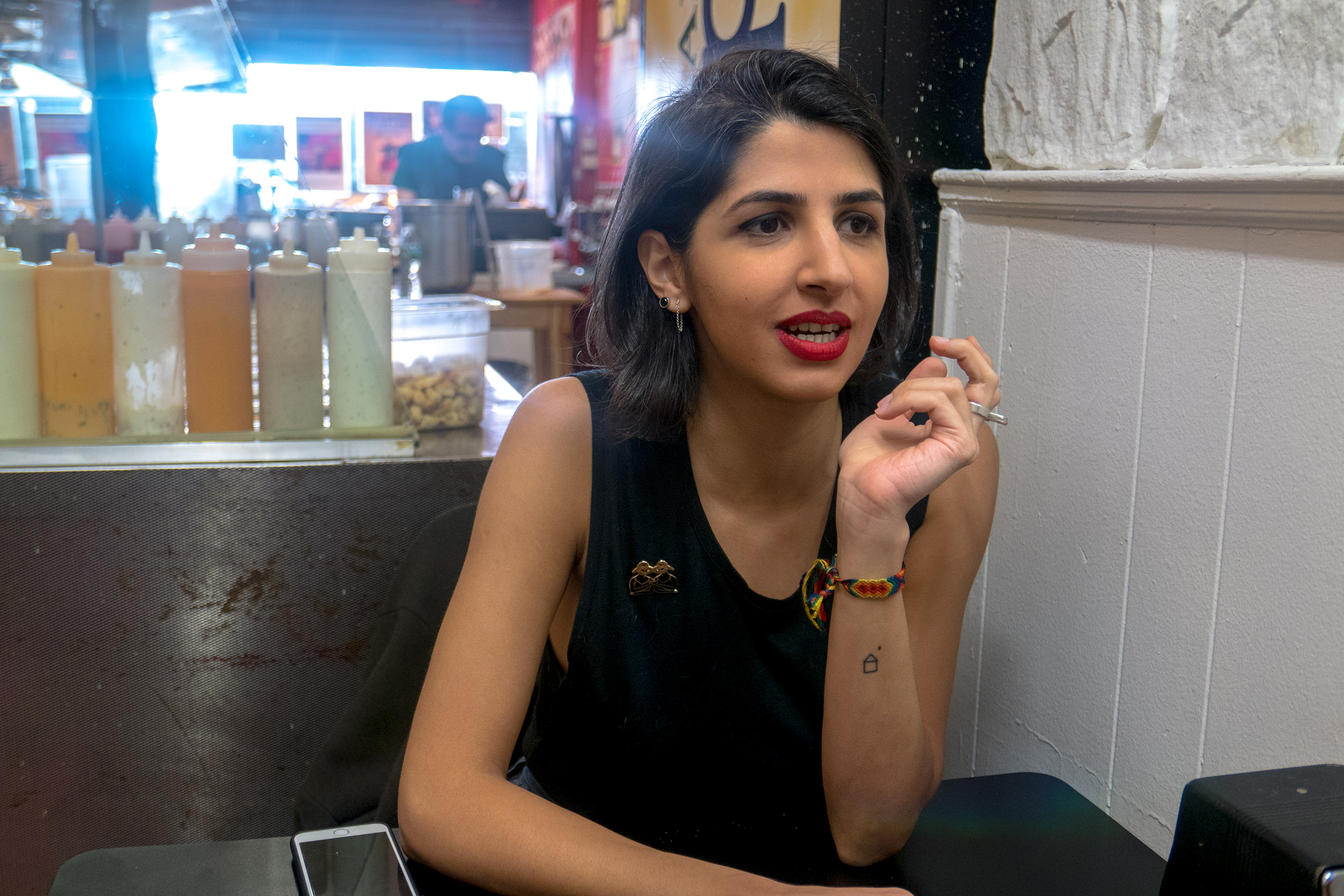 Mahya: What has changed since you reached out to me. Who were you before and who are you now?

Kiana: As a kid, teen and young adult I erased the Iranian-ness from my identity as a defense mechanism growing up in the deep south. It’s easy to feel accepted if you figure out how to make versions of you. But what you don’t realize is in that process, you lose your identity a bit, and then you just float aimlessly. In my late 20's I started re-discovering my Iranian culture and I was hungry to learn more, while unlearning a bit of that American assimilation. You get me in a way that a lot of people don’t, and there’s just an incredible value in being seen and known like that. So these days, I just feel 100% me, and I feel less like I have to prove myself. I am also just really excited about our collaborative energy, it’s really special!

Kiana: What song have you been obsessed with the last week?