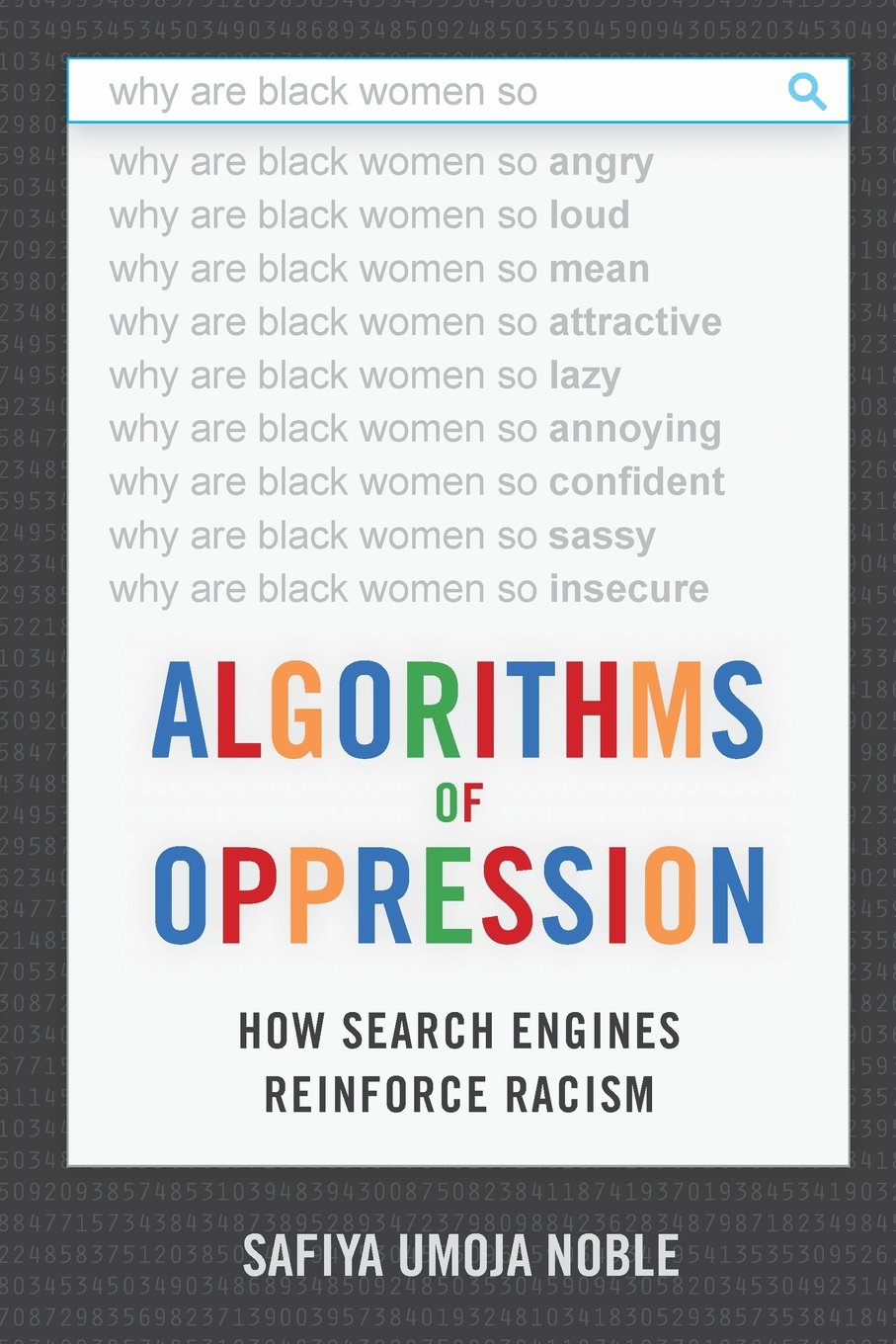 In Algorithms of Oppression, Safiya Umoja Noble challenges the idea that search engines like Google offer an equal playing field for all forms of ideas, identities, and activities. Data discrimination is a real social problem; Noble argues that the combination of private interests in promoting certain sites, along with the monopoly status of a relatively small number of Internet search engines, leads to a biased set of search algorithms that privilege whiteness and discriminate against people of color, specifically women of color. Through an analysis of textual and media searches as well as extensive research on paid online advertising, Noble exposes a culture of racism and sexism in the way discoverability is created online.

In this groundbreaking book, Melissa V. Harris-Perry uses multiple methods of inquiry, including literary analysis, political theory, focus groups, surveys, and experimental research, to understand more deeply black women's political and emotional responses to pervasive negative race and gender images. Not a traditional political science work concerned with office-seeking, voting, or ideology, Sister Citizen instead explores how African American women understand themselves as citizens and what they expect from political organizing. Harris-Perry shows that the shared struggle to preserve an authentic self and secure recognition as a citizen links together black women in America, from the anonymous survivors of Hurricane Katrina to the current First Lady of the United States.

Spare and unsparing, God Help the Child is a searing tale about the way childhood trauma shapes and misshapes the life of the adult. At the center: a woman who calls herself Bride, whose stunning blue-black skin is only one element of her beauty, her boldness and confidence, her success in life; but which caused her light-skinned mother to deny her even the simplest forms of love until she told a lie that ruined the life of an innocent woman, a lie whose reverberations refuse to diminish; Booker, the man Bride loves and loses, whose core of anger was born in the wake of the childhood murder of his beloved brother; and Sweetness, Bride's mother, who takes a lifetime to understand that "what you do to children matters. And they might never forget."

1) "Molly Crabapple on Using Art to Expose Injustice from Syria to Guantánamo to Puerto Rico" on Democracy Now!

Molly Crabapple is an award-winning artist and writer who has reported on the refugee crisis in Greece, Guantánamo Bay, disaster capitalism in Puerto Rico, and the war in Syria. She illustrated and co-authored “Brothers of the Gun: A Memoir of the Syrian War” with Marwan Hisham, a Syrian journalist living in exile in Turkey. They first started collaborating in 2014, when Hisham was still living in ISIS-occupied Raqqa. He would send her photographs of life under ISIS, and she would draw illustrations of them.

Data & Society welcomes Safiya Umoja Noble for this talk based on her most recent book. In Algorithms of Oppression, Safiya Umoja Noble challenges the idea that search engines like Google offer an equal playing field for all forms of ideas, identities, and activities. Data discrimination is a real social problem; Noble argues that the combination of private interests in promoting certain sites, along with the monopoly status of a relatively small number of Internet search engines, leads to a biased set of search algorithms that privilege whiteness and discriminate against people of color, specifically women of color.

3) "From Spikes to Spindles + Chicana at Brooklyn Academy of Music"

Part of BAMcinématek series A Different Picture: Women Filmmakers in the New Hollywood Era, 1967—1980. "Chicana" by Sylvia Morales is a watershed work of the Chicanx Movement spotlights the political and cultural contributions of Latina women from the Aztec era to the present, with an emphasis on their roles as revolutionary leaders. "From Spikes to Spindles" is a revelatory documentary by activist filmmaker Christine Choy, which combines archival footage and interviews to trace the history of Chinese-American identity, the foundations of New York’s Chinatown, and the community’s rising political consciousness in response to police brutality and economic discrimination.

Founded by legendary conservationist John Muir in 1892, the Sierra Club is now the nation's largest and most influential grassroots environmental organization -- with three million members and supporters and successes ranging from protecting millions of acres of wilderness to helping pass the Clean Air Act, Clean Water Act, and Endangered Species Act. More recently, the Sierra Club made history by leading the charge to move away from the dirty fossil fuels that cause climate disruption and toward a clean energy economy. Learn more

350 uses online campaigns, grassroots organizing, and mass public actions to oppose new coal, oil and gas projects, take money out of the companies that are heating up the planet, and build 100% clean energy solutions that work for all. 350's network extends to 188 countries. 350.org's milestones include campaigns against Keystone XL and Dakota Access in the United States, stopping fracking in hundreds of cities and states in Brasil, joining historic grassroots mobilizations before and after the Paris Climate Agreement was signed, and pushing hundreds of universities, foundations, cities and churches to divest from fossil fuels. Learn more